Followed by Jam session at Rafferty’s (free adm)
Hawk’s Well Theatre, 8pm, €20/18
Buy Tickets
Reid Anderson: Bass
Ethan Iverson: piano
David King: drums
The Bad Plus came together at the end of the 20th century and has avoided easy categorization ever since, winning critical hosannas and a legion of fans worldwide with their creativity, unique sound and flair for live performance. Based in New York City, the intensely collaborative trio has constantly searched for rules to break and boundaries to cross, bridging genres and techniques while exploring the infinite possibilities of three exceptional musicians working in perfect sync. The Bad Plus’ ninth studio recording (and first since 2012’s Made Possible), The Rite of Spring continues the leaderless trio’s committed belief in what they’ve dubbed ‘avant-garde populism’ — the idea that serious music can be as engaging and accessible as it is forward-thinking and provocative.
“It’s about as badass as highbrow gets.”  – Rolling Stone
“Better than anyone at mixing the sensibilities of post-60’s jazz and indie rock…..” – The New York Times
“Audacious, rule-breaking jazz trio crunches and at times pulverizes swing to let improvisational freedom shine…Dynamics play a huge roll in the act’s music, as does humor, an element sorely lacking in most of contemporary jazz. But beauty is also key… jazz purists tremble while the vanguard flocks.” – Billboard
“So, if this piano trio wants to play as loud as a rock band…well, let ’em rip….these bad boys have the musicianship to back up their attitude.”– The New Yorker
“The Bad Plus are an acoustic jazz trio for the future.”– Blender“With the most distinctive sound of any three-piece outfit since Nirvana, The Bad Plus again demonstrate vitality few bands–rock, jazz, or whatever–can match.”– Amplifer“The Bad Plus are a reminder that American jazz hasn’t gone to sleep. Play any of their albums and their collective sound leaps out of your speaker, steps all over your furniture and scares the bejesus out of the cat.”
– Observer Music Monthly

“one of the greatest living jazz pianists” – Los Angeles Times Auckland, New Zealand born Alan Broadbent has worked with so many legends of music history: To name but a few: Diana Krall, Nelson Riddle, David Rose, Johnny Mandel, Paul McCartney, Charlie Haden and Natalie Cole. He appeared on her famous “Unforgettable” album, toured as her pianist and, a little while later, as her conductor. At this time he wrote an orchestral arrangement for her second video with her dad, Nat, “When I Fall In Love”, which won him his first Grammy for “best orchestral arrangement accompanying a vocal” and soon after won a second Grammy for an orchestral accompaniment with Charlie Haden’s Quartet West.

Broadbent is Diana Krall’s conductor for her occasional orchestra concerts and is the conductor on her “Live in Paris” DVD. Recently he has been the arranger on Glenn Frey’s cd with strings, “After Hours”, and wrote six string arrangements for Sir Paul McCartney’s “Kisses On The Bottom” with the London Symphony. He has just returned from solo piano concerts in the UK, Poland and France. It has been his lifelong goal, through his orchestral arrangements and jazz improvisations, to discover, in popular music and standard songs, deeper feelings of communication and love.

SJP is honoured to have Mr. Broadbent as our principal piano tutor on this year’s summer school. This is a chance to see the master at work in a solo setting. Mr. Broadbent will be joined by his special guest, also a member of the stellar 2014 summer school faculty at SJP, the great American vocalist Judy Niemack .

Sligo jazz brings Hot Club of Dublin violinist (and member of NoCrows and Yurodny), Russian virtuoso Oleg Ponomarev plus his HCOD colleague, Ireland’s answer to Django Reinhardt, Fintan Gilligan on guitar, along with SJP guests, top UK session drummer Paul Clarvis, Cathal Roche on sax & clarinet and bassist Eddie Lee on his only appearance at the festival outside of his role as artistic director & chief organiser.

plus: Jam Session till late with a host of Irish and international talent

Born in New Orleans, Christian Scott received his first trumpet at 12 as a gift from his mother and grandmother. As Scott‘s uncle was modern jazz saxophonist Donald Harrison, it was no surprise that Scott soon became very proficient on the trumpet, so good in fact that Harrison began having him play at his gigs. Following in his uncle’s footsteps, Scott enrolled at the prestigious New Orleans Center for the Creative Arts and then at the Berklee School of Music in Boston, where he received a full scholarship. There, he was selected to be part of the Berklee Monterey Quartet in 2004, chosen from four of the school’s finest musicians, and played at the Monterey Jazz Festival. Though Scott had already appeared on his uncle’s 2002 album, Real Life Stories, he made his major-label solo debut at age 22 on Concord Jazz, with 2006’s Rewind That. The record combined rock and R&B motifs with modern jazz, featured Harrison as a guest performer, and was nominated for a Grammy later that year. Scott returned in 2007 with Anthem, a passionate response to the suffering of his fellow New Orleanians post-Hurricane Katrina. In 2010, Scott released his third studio album Yesterday You Said Tomorrow. His musical ambition manifested itself expansively in 2012 with the release of his fifth album, the double-disc Christian a Tunde Adjuah.
“I grew up in New Orleans – I’ve seen a lot of rough stuff. I’ve seen people get shot and killed right there and seen the life come out of a human being. And when you see stuff like that, you realize that you could blink and miss it and a life could be over. So, at the end of the day you may as well covet the opportunity that you have to get to know yourself. And if you’re thinking about that when you’re making music, then your music is probably going to be unique because you are.”

“I grew up in New Orleans – I’ve seen a lot of rough stuff. I’ve seen people get shot and killed right there and seen the life come out of a human being. And when you see stuff like that, you realize that you could blink and miss it and a life could be over. So, at the end of the day you may as well covet the opportunity that you have to get to know yourself. And if you’re thinking about that when you’re making music, then your music is probably going to be unique because you are.”

NORTH AND SOUTH – Best of Irish Jazz PLUS JAM SESSION with a host of Irish and international talent.

Northern and Southern Irish jazz greats on one stage including 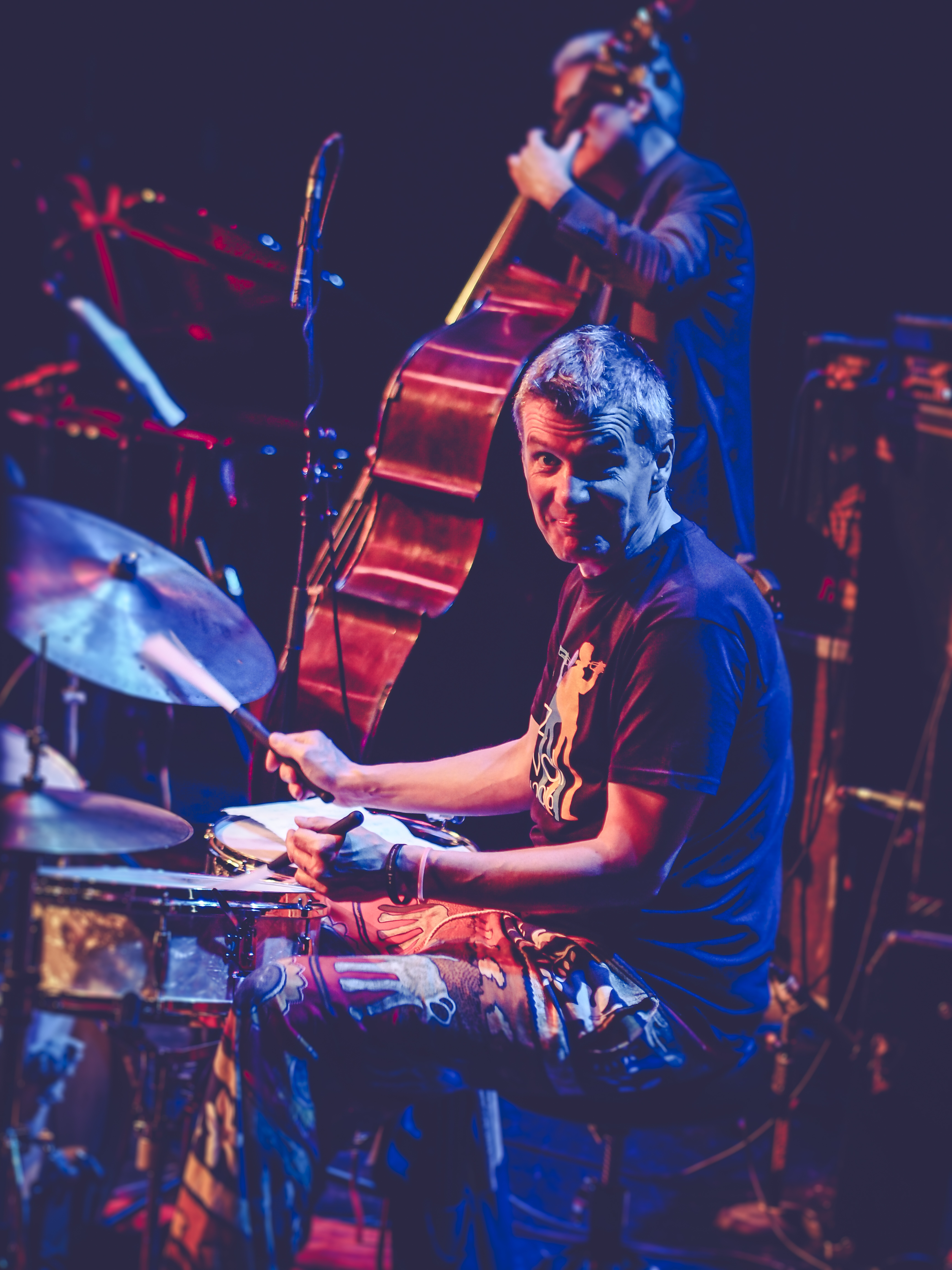 Raffertys 1pm sharp, Adm €10 on door.
Linley Hamilton: trumpet Damien Evans: Bass; Julian Collarossi: Guitar, Johnny Taylor: piano; Dominic Mullan: drums
Trumpeter Linley Hamilton has been a mainstay of the Northern Irish jazz scene for well over two decades. An in-demand session musician, Hamilton has played on over a hundred recordings of various stripes, lending his burnished tone to rock and pop artists and singer-songwriters alike. But it’s as a jazz musician, jazz educator, jazz radio broadcaster, and not least, as an utterly tireless advocate of the music that he’s best known. With a quintet comprised of some of the very best jazz musicians North and South of the border, Linley celebrates his latest CD release with this intimate lunchtime date featuring this tight and talented young band.
4.30pm Hargadons, O’Connell Street, Adm Free
Paul Clarvis Trio The top London drummer, who has performed with Stevie Wonder, Mick Jagger and Nina Simone, loves nothing more than playing a few jazz tunes in Hargadons come July. Here he’ll be joined by some guests from SJP’s stellar summer school faculty.
6pm Rafferty’s Lord Edward Street, Adm Free DAILY JAM SESSION with a host of Irish and international talent.